May's contest winner is DK, who donated through the Crowdrise fundraiser page on May 16th, and who (per the original contest post) receives her choice of any spell or prayer kit I make (or a custom one if I haven't gotten around to posting them all yet, and I haven't). Send me an email, DK, to claim your prize!

Uncrossing, Trick Killing, Jinx Breaking, and Spiritual Cleansing are usually all related and/or have some overlap, but are not always identical. Different blenders and creators of formulae may focus on different components or cover multiple bases in their blends, so some folks make an Uncrossing formula that does a slightly different job or has a slightly different focus than a Jinx Killer formula, for instance, where others may only offer one type of Uncrossing blend that is designed to cover all those bases. If your product supplier has multiple options for Uncrossing-type blends, you can always ask what they recommend for your situation.

Here's a quick breakdown of my own formulas. In general, they are all designed to get rid of nasty, negative junk that is messing you up. Technically, Uncrossing is to remove crossed conditions. You might use this if you know somebody has laid tricks for you to cross you up, but it's also useful more generally to clean off stuff that's not deliberately laid on you but has just "hit you" or accumulated (the evil eye, or a nice long career in a toxic workplace full of envy or some of those people who just thrive on aiming spite at others). If you've got a long-standing streak of bad luck and you can't seem to get free, or if you have had a reading or "spiritual checkup" done and you're suffering from an unnatural illness, or if you've got a general sense of spiritual malaise or like negativity is stuck to you, Uncrossing has elements to help with that. In some situations you might also want to do some spiritual cleansing, Cast Off Evil, or Van Van work too, but my Uncrossing is designed to cover a few different bases, even if you aren't sure exactly what the deal is or whether you've been specifically targeted.

So what's the difference between Jinx Killer and Uncrossing when you are suffering from a crossed condition? Honestly, not much. The scent is a little different. The ingredients are a little different. Jinx Killer (and Hex Breaker) are targeted more toward situations where you have been hit with something, have been deliberately targeted by someone, so they focus a little more tightly on the crossed condition, jinxing, hexing, goofering, etc. and a little less on the "I just feel like I have some sticky, low-grade crap hanging around" stuff. Honestly, the only reason I started carrying Jinx/Hex Breaking stuff separately, as separate formulae, is because when I started selling my formulas after I got back to the States (which meant I had to actually, finally, formally come up with names for them), I had lots of clients and customers from a specifically-not-hoodoo background. In 2002, in fact, the overwhelming majority of my non-local clients probably weren't entirely sure what hoodoo was. "Crossed conditions" was not a phrase they were familiar with (nor was "goofering") - they were familiar with "jinx," "hex," and "curse." So that's why I carry Jinx Breaking as well as Uncrossing, really. But all of these are useful for removing crossed conditions and taking off hexes and such.

And the only reason I call my soap Can't Cross Me and not Uncrossing is because I name my formulas consistently based on the ingredients and recipe - meaning that if you get my Uncrossing oil, Uncrossing bath crystals, and Uncrossing candle, they all have the same scent, same herbs, same oils, same usage, etc. So if it's called Uncrossing, you know what it will smell like, what it's for, and how you react to the blend, no matter which form of it you get. Because Can't Cross Me does not use exactly the same formula, even though it does the same job, it has a different name. Trick Killing foot soak and Jinx Killing powder do the same job, but the recipe is different, so they have different names. I don't have a Trick Killing oil, although I could make one to go with the foot soak, simply because it's only in powder or wash form that Trick Killing does anything that Jinx Killer oil doesn't do (or doesn't do as easily).

When I name a line of products, they all have the same ingredients if they have the same name. They are the same formula, just in different form. My Attraction formula doesn't have a liquid bath version, for instance -- if it did, all I would be doing is brewing up the bath salts in water for you, which means you'd be paying extra for water and for shipping the weight of it. And because it would then contain nothing that will preserve it like cologne or alcohol ingredients, it might go bad before you could use it if I brewed it up before I shipped it. The recipes that make brewed baths that can be shipped  all contain something that makes them a little more stable to ship, like a cologne ingredient or some kind of essential oil or herb that gives them a bit more travel-time than plain old herb-water would (though no brewed bath is meant to have a long shelf life - get a dry bath or a soap if you won't use it right away). So regular conjure formulas that come as salts/crystals are not usually going to have a liquid brewed bath version with that same name. But if you want something freshly brewed, or want a liquid soap that will be cool to ship internationally, then there will be something suitable in my shop - it will just have a slightly different name. You might need Can't Cross Me liquid soap instead of Uncrossing crystals, for instance, or you might want a brewed herb bath, which comes in a kit called Hex Breaker. Fortunately, though, the majority of this stuff is traditionally named for what it does, so once you get the general idea/vocabulary, it's easy to find a formula that comes in the form you want.

Trick Killing Fizzing Foot Soak
Foot track magic is an ancient art and it's used every day by people from all walks of life, even in this age of pavement when some people never go barefoot at all.

This recipe is adapted from a good old-fashioned homemade foot soak blend to rejuvenate tired feet. To this, I've added ingredients traditionally valued for killing tricks laid for you, eliminating any jinxing messes you might have walked through, or simply managing a quick Uncrossing when you can't manage the full ritual bath just yet. I consider it first-aid for crossing work and malevolent foot track magic, and it has the beneficial side effect of soaking away daily stress and grime, too.

If you have a loved one who won't take a spiritual bath but you have reason to fear they've been targeted, and they *will* indulge in an innocent-sounding foot soak, this can be a handy tool in your arsenal for sneaky-uncrossing work. It smells perfectly innocent and contains all-natural ingredients. Just add a scoop of the powder into a basin of warm water, stir gently, and relax. 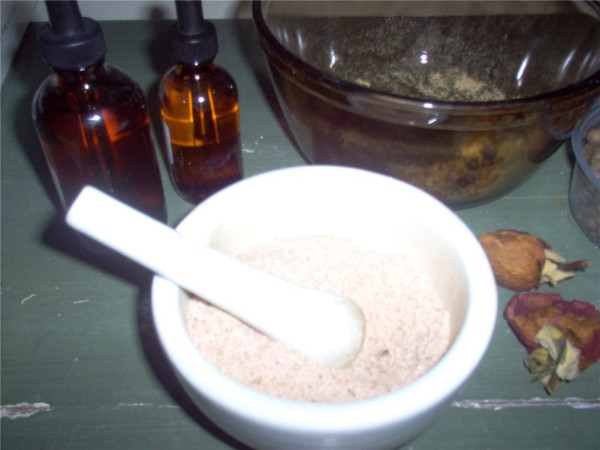 Can't Cross Me Ritual Soap
This is an herb- and essential oil-infused liquid castile soap, containing ingredients believed by many to end crossed conditions and stop streaks of bad luck and negativity. This is a modern urban hoodoo formula along the lines of an Uncrossing formula, with a fabulous scent in an easy to use soap base. No time for a traditional spiritual bath? At least wash your hands!

This is a proprietary formula made here at Karma Zain. This is pure, undiluted castile soap containing essential oils and botanicals; a little goes a long way. I could dilute it for you, but you'd be paying for water, so I haven't - thus, it's more like a concentrate than a soap proper. You only need a splash - it won't make big suds like a shower gel that has additives and detergents for big soapy bubbles, but you only need a splash to get all of you clean.

Extra-Strength Jinx Killer Powder
This is an old Hyatt formula for hex breaking that is used specifically to neutralize enemy work *when your enemy has been using your personal concerns.*

One of the special ingredients is graveyard dirt; I have gathered it from the appropriate grave using the appropriate means of payment. Sprinkle it around your home, yard, and office if your enemy has been sprinkling powders around your home or work; dust your hands and feet with it before you go around your enemies; use it in mojo bags, spell bottles, and amulets; mix it with some baking soda or rice powder and use it as a "dry shampoo," to sprinkle in your hair and then comb out (it's dirt, but it's perfectly safe as long as you don't eat it or inhale it, so don't get queasy about putting it in your hair). 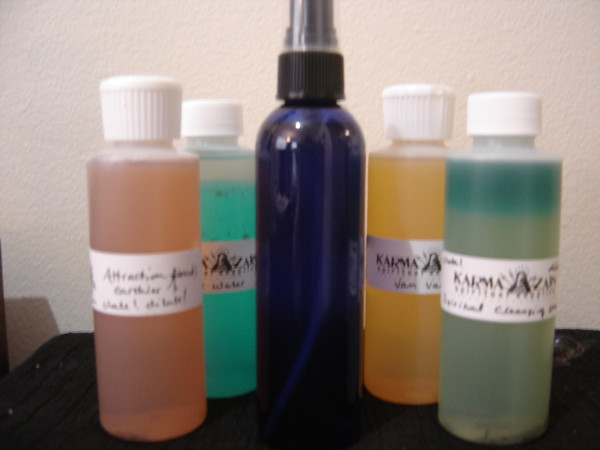 Trick Killing Water - Hair Rinse
Too weirded out by the idea of putting graveyard dirt in your hair if your enemy has used it against you? Trick Killing Water will seem much less weird and much more familiar. This is another old Hyatt formula. The informant gave this recipe to Hyatt, specifying that it could be used to wash a victim's head if a trick had been laid on them using their hair.

Many old conjure tricks call for the hair of a target or victim to be used in various ways, and these tricks using personal concerns can be hard to take off sometimes if you can't get to the actual vector or mechanism of the work (like a bottle spell kept in the worker's home, or a coffin with your hair in it buried in a graveyard). I specialize in protection and uncrossing work, and over the years I've gathered and developed and mixed and collected several different "cures" for tricks laid with personal concerns -- because I like to recreate these old recipes, but also because they're useful!

This one is a liquid wash or rinse. It is not a brew (brews are made by steeping herbs in water, which limites their shelf life) and it is NOT a shampoo or soap - you simply pour it on your hair as part of a spiritual cleansing or ritual bathing if you have reason to believe an enemy has laid a trick on you using your hair as a personal concern. You then let it dry, just like you should be letting your spiritual bath water dry on your skin afterwards. This formula is said to kill that trick. You use it by actually rinsing your head in it, hopefully as part of a larger uncrossing bath rite. Fortunately, it actually smells pretty good, which is kind of uncommon for some of these old-school conjure recipes.

***
I don't have time to get into spiritual cleansing and Van Van and such now, but I'll return to the topic for a part 2 later. Happy hoodooing!
Collapse