No, Crown of Success is not the go-to formula for stopping gossip.

No, the term “coffin nail” is not used to describe any rectangular or square iron nail.

Yes, children count as people when you’re talking about whether someone can handle your mojo bag.

Yes, someone that says a mojo bag should be buried to return it to the “mother” is importing shit from some other tradition into what they are telling you and you should be skeptical.

No, mojo bags are NOT “offerings.” They ARE charms. This is some mix-and-match shit by somebody who couldn’t even be bothered to read Flash of the Spirit carefully.

No, mojos in traditional conjure are not considered or said to have “ashe” by traditional practitioners who are not also on an ATR path. This is mixing apples and oranges in terms of culture and vocabulary. Now, it is true that lots more people probably know that word than did in the 70s or 80s, and the underlying concept is not so much the problem here, given that the word could be said to have entered common parlance in many circles. The problem is that when somebody pretends to be an authority on traditional conjure and says:

* “we don’t use salt on altars in hoodoo” (apparently totally ignorant of the fact that salt is a traditional ingredient in plenty of conjure formulas, and too stupid to realize they contradicted themselves by advising you cleanse your candle holders with salt water – this is all shit imported from Wicca or some European tradition, y’all.)

…they are betraying themselves as not only ignorant but also unapologetic about playing some mix-and-match shit. In my book, when you misrepresent the spiritual and religious practices of others, blatantly rifle through the vocabulary and concepts of no less than half a dozen traditions in one blog post, and then try to “educate” people according to your mix and match shit, that’s called being a liar and fraud.

Look, I get search terms. I had an ebay store for ten years. I wrote some phrases for the purposes of having my stuff turn up in search results typed in by people that didn’t know what else to type besides “voodoo doll,” even though the popular conception of voodoo dolls is pretty insulting to vodoun and pretty ignorant of how doll-babies are actually used. If I had refused to put in the key terms that people use to search for things, then they would have found fake crap and only fake crap; I do have to sell stuff in order to stay in business. I have put “wicca” and “hoodoo” in the same ebay listing before – it’s called search engine optimization. I understand why it’s a necessary evil. But I then went on, in the listing, to explain that – I figure if somebody is going to find my stuff via some fuzzy or messy concept or vocab, I can at least try to ensure they get access to more accurate info after having done so. I make sure that if they bother to read the listing, they will understand that wicca and hoodoo are not interchangeable, that the common conception of voodoo dolls is pretty inaccurate, that my voodoo rosaries and oils are not traditional/historical but things I created because there is a place for them among today’s serviteurs (and the loa like them), that chicken feet usually don’t have a damn thing to do with the “voodoo” search term that brings people to the listing, etc.

I have pissed off both narrow-minded Christians AND conjure practitioners by writing about St. Clare being associated with psychic vision. The former group is offended that a saint is associated with psychic and occult stuff, the latter offended because they think I’m misrepresenting conjure by making it seem that saints are integral part to it. Sorry to both, but I didn’t invent it – saints ARE used by some (not all) traditional conjure practitioners, whether you like it or not, and St. Clare IS associated by plenty of folks with psychic vision. It's not my fault - it's just a simple fact. I have pissed off followers of multiple ATRs, I’m sure, by saying that in some houses/temples, such and such orisha is sometimes associated with such and such loa. I’m not defending or even commenting on the practice (and in the description of the thing under consideration, I always explain that this is not necessarily a widespread association or even a wise one to make) – but I am reporting on *what I have seen with my own two eyes,* and sorry, but I have seen practitioners of one ATR put a statue meant to represent a spirit in another ATR on the same altar. It happens. (It probably happens a lot more in New Orleans, but you also have to realize something about the loa — they have their preferences and make them known, and most of these statues and things were made in China anyway, by people of no religion even vaguely resembling that of the person who eventually buys the statue. If Ghuede wants a plastic Wal-Mart tumbler with Halloween bats on it for the altar, or a carved skull pendant made by Buddhist monks, Ghuede gets it. 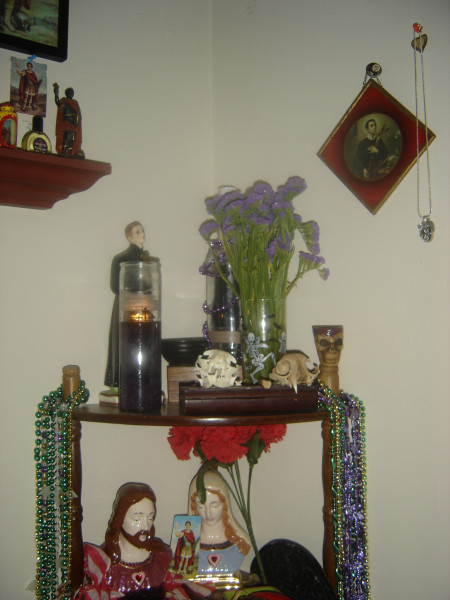 If that pisses anybody off, well, I serve Ghuede, not them. If Erzulie Freda wants a string of shiny beads that were made for another saint, spirit, or orisha, and those things are available for me to get without having to change my religion or lie, then I don’t see the problem. Erzulie Freda knows she isn’t Oshun or Babalon, so people getting upset about beads made for Oshun, or a rosary made by a Thelemite for Babalon, but sold to the public and residing on my Freda altar, can get mad if it makes them feel better. Whatever. I serve Freda, and if they did too, they’d probably chill out because they would know how Freda gets about what Freda wants :-)

But what you don’t see me doing is trying to teach anybody about Oshun, or claim that I serve Oshun, or claim that Freda IS the Mother of Sorrows, or that Mater Dolorosa IS Freda, etc. The loa sometimes seem to be more “catholic” (see sense 2) and adaptable than many modern practitioners of ATRs tend to be :-) I have a twenty-plus-year relationship with Erzulie Dantor; I listen to her even when she tells me something that contradicts what somebody in another house or temple does.

BUT. When you pretend to teach people or explain things to them, and you call your shit something it is not, you suck and you deserve to get called out. If you are brazen enough to make a claim like “all good hoodoos must do [X thing that I do],” when what you do is import shit willy nilly and play mix-and-match and expound factually incorrect information, you are disgusting. If you are then so astonishingly stupid as to plagiarize and copy people who should be schooling you, well, some lawyers will eventually get involved, but what you should really be worried about is what Manman Brigitte is going to do you when you farm her out to non-vodouisants who want a charm for a court case and don’t know or care the first thing about the traditions of serving this spirit. You are likely to get schooled with a boot. You should not only be ashamed of yourself – you should be worried.

How to spot a fake: they plagiarize and steal from established workers, artists, and serviteurs. Theft of my text by ConjuredCardea, aka Sarah Best, aka Moma Sara, on Etsy, here. See my 2002 store listing or 2009 blog post. I sent her a cease and desist note via etsy, but here's proof if she takes it down and denies wrongdoing, theft, and fraud: 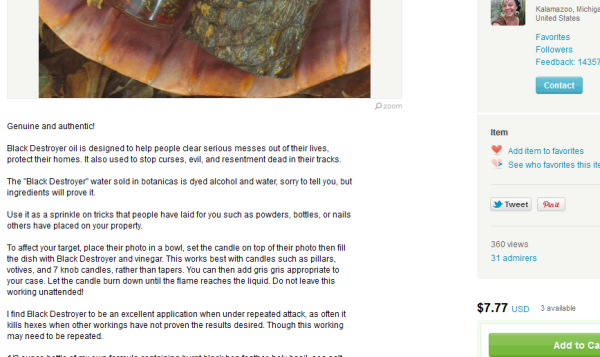 A client writes to ask how to use Black Destroyer Oil.

Black Destroyer formulas are designed to help people clear serious messes out of their lives, protect their homes, and stop curses, evil, and resentment dead in their tracks.

Basically, you can use it for long distance candle work, to dress candles; you can dilute it in mineral oil and use it as a sprinkle on messes that people have laid for you (like if you find powders in your yard); stuff like that. When I'm dealing with somebody who is aiming stuff at me, I like to dress a candle with Black Destroyer and/or Reversing oils (depending on what I want to happen), set their photo in a low, wide dish, set the candle on top of the photo, and then fill the dish with a dash of Black Destroyer and a lot of vinegar. (This works best with wider candles like small pillars, votives, and 7 knob candles, rather than the kind you have to put in a candle holder. You want to stick it right on top of their photo, and you need the candle to be able to hold it down.) You can add whatever herbs and stuff you want, appropriate to your case. Then let the candle burn down 'til the flame reaches the liquid. Don't do this unless you'll be right there to keep an eye on it though.

I find Black Destroyer to be an excellent "first aid" application when under attack, and often it kills the hell out of stuff without you having to do a whole lot more, though of course this depends on who is throwing for you and what they are using to do it. But I keep Black Destroyer Oil in the glove compartment of my car, along with Fiery Wall of Protection powder, my Safe Travel mojo, a Mag-Lite, a map, a Gerber multi-tool, a tampon, and a protein bar. Never leave home without it!

I am not one to get involved in conjure drama and name-calling. I tend to make private jokes on twitter when I see somebody being stupid and playing mix and match bullshit and pretending to be traditional hoodoo workers and telling people to cleanse mojo bags with oil, and then I leave it alone. But this is simple, demonstrable plagiarism, fraudulently passing off someone else's work as her own, and is theft of my intellectual property which is my means of making a living. It is against the law. It's also just shitty.

She didn't just steal from me. She also stole from cat yronwode's Hoodoo in Theory and Practice. Here's just one example: 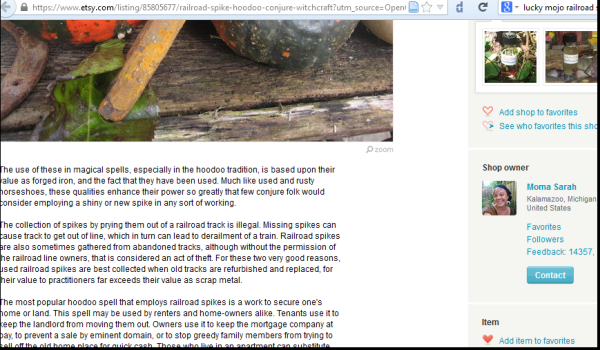 And here, for your comparison purposes, is cat's page on railroad spikes. 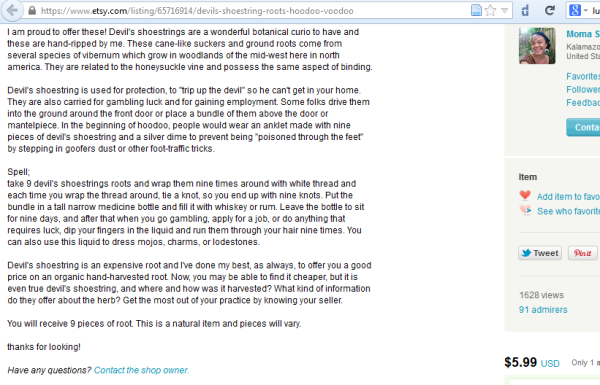 And then she joined the tired old bandwagon of people who have been stealing from my chicken foot listing for over a decade now. 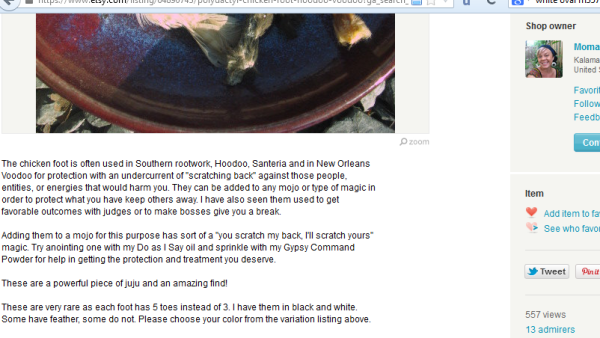 Stolen from the same damned copy I've had in my chicken foot listings since 2002, though she did add some stuff of her own invention, with no basis in any Southern conjure lore that I've ever heard, and I've been doing this a long damned time, about using chicken feet to gain favor with judges. I'm not even going to comment on how impossible it would be to carry a standard-sized mojo containing a chicken foot of this size, which should tell you a lot right there. It's funny - I have a blog post about how often my writing on chicken feet gets stolen and plagiarized. Silly bint. These tricks are NOT for kids.

ETA: an observant client has informed that she has noticed for some time that many of "Moma Sarah's" oil descriptions are taken verbatim or nearly verbatim from Lady Rhea's The Enchanted Formulary.

The evidence is piling up and it's damning. This is no case of "I accidentally forgot to give you credit when I copied your work" (which by the way is STILL copyright violation, even if you give credit - you can't just copy/paste an entire work and republish it). These numerous listings from numerous places demonstrate clearly that Sarah Best, aka ConjuredCardea, is a thief, liar, and plagiarist. Buyer beware.
Collapse