Angry Angels and Saints That Smite

I'm posting this as a blog entry 1. because I can't seem to comment on Mama Cat's blog (maybe she turned off comments or my browser is jacked up), and 2. I don't want to take over her blog with my rambling anyway. Anyway, this is in response to her blog post here. I just want to chime in on the "saints punishing you" thing (if you read this whole thing, you'll see that I am not disagreeing with her - I'm just elaborating).

People tend to think of saints as benevolent entities, close to God, involved in helping the devoted. Actually, there is an extremely long tradition of punitive miracles even in quite orthodox Catholic practice. I go into this a bit in this blog post. If you read the Old Testament, it's full of them; God smote the hell out of all kinds of people, and he's God. Saints and angels smite too. That isn't the part people usually think of, though. As Tony Burke points out in his academic blog here, the study of punitive miracles is pretty much neglected by scholars as well. But such power to harm is part and parcel of the workings of saints, deities, and spirits in many different cultures and religions - absolutely including Christianity. Burke notes,

"Though not as plentiful in the sources as beneficent miracles, punitive miracles are nevertheless found in literature throughout Mediterranean antiquity. Holy men wield power, and sometimes that power is not used with mercy. Thus, to the ancient mind, it is reasonable for Elisha to call upon bears to maul annoying children, for Apollonios to threaten repressive corn merchants, for r. Eliezer to kill r. Gamaliel, for Paul to blind a false prophet, for Jesus to whither a fig tree, and so on. Of course, the power behind these curses comes from the gods, and sometimes the gods even curse directly—the Hebrew Bible, for example, contains numerous punitive acts perpetrated by Yahweh himself."

My PhD work focused on this stuff in medieval England (and to a lesser extent, elsewhere), so this is obviously a favorite topic of mine. I don't claim to be an authority on all world religions or even every Christian saint, but I think my training and research makes me pretty much qualified to call myself an expert on these "economies" and systems of circulation of relics, saints, angels, human beings, and how they all tend to interact and have interacted historically. I have published peer-reviewed academic articles on angels, saints, religious literature, and angelology. So I cannot in good conscience say that the popular image of angels as smiling feathered beautiful beings in gowns helping children over bridges is terribly accurate, nor can I say that punishment, smiting, punitive measures, retribution, etc are not a very important component of what sainthood is and has been understood to be for a very, very long time. If you think saints and angels are all benign and smiling and all about dropping everything to tend to whatever your little human issue is, you are a fool. 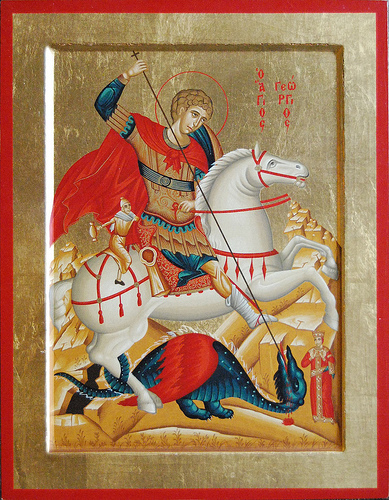 Creative Commons License, Some Rights Reserved: Jim Forest
However, I do agree with Cat: for today's typical practitioner of folk spirituality, such things are not very common. And even when they happen, saying a saint has "attacked" you is not very accurate; that's not really how it works. And anyway, the saints are more likely to smite you or screw you up if you have a deep, genuine relationship with one in particular -- an obligation -- and really drop the ball in terms of keeping up your end of things. They are NOT likely to starting raining hell down on somebody who is new to working with them and is making a legit attempt, and frankly I've found that they have better things to do than go around smiting people for making an honest mistake or being oh-so-humanly a bit of an ass. (The saints are human too - well, most of them.) Many punitive miracles in medieval hagiographies and lore are due to somebody being a dumbass and not getting the original message, not doing something they were already told in less punitive or frightening terms to do, failing to do something they were being warned they were obligated to do. For instance, in the lore of St. Michael, there's this idiot named Garganus who made one of his men shoot a bull that St. Michael was trying to send as a sign of where he wanted a chapel built. Thick-headed Garganus didn't get the message; the bull wandered off near this cave and Garganus threw a little fit and ordered the bull shot. The arrow meant for the bull blew back and hit the servant (who was just following orders, after all). Garganus went to the bishop, being troubled by these strange events, and apparently softened his heart a little. Then later St. Michael appeared to him and said, basically, "This guy is dead because it is my will. Now pay attention; build my church at that cave the bull was sent to show you." (Here's a photo of the grotto chapel of St. Michael at Mt. Gargano.)

Gerald of Wales, telling of Ireland, wrote of a priest that encountered two wolves on his way Ulster. One spoke to him. The shocked priest reported that the wolf said, "There are two of us, a man and a woman, natives of Ossory, who, through the curse of one Natalis, saint and abbot, are compelled every seven years to put off the human form, and depart from the dwellings of men. Quitting entirely the human form, we assume that of wolves." The priest gave the sick wolf-wife the last rites. Before leaving them, he asked the wolf-man if the island's inhabitants would continue to suffer under invaders. The wolf answered, "For the sins of our nation, and their enormous vice, the anger of the Lord, falling on an evil generation, hath given them into the hands of their enemies. Therefore, as long as this foreign race shall keep the commandments of the Lord, and walk in his ways, it will be secure and invincible; but if, as the downward path to illicit pleasures is easy, and nature is prone to follow vicious examples, this people shall chance, from living among us, to adopt our depraved habits, doubtless they will provoke the divine vengeance on themselves also." [*] Moral of the story for Gerald anyway: while saints and abbots may curse sinners, when we talk about great misfortune, we usually bring this stuff on ourselves somehow through wrong action or neglect of right action. He then goes on to tell of ravens falling dead for feasting on the carcass of St. Vincent, and of an archer who died miserably after innocently trying to shoot one of St. Colman's ducks for his evening supper.

That is NOT to say that traditions of saints raining down hell on somebody do not exist in conjure lore, in contemporary folk Catholic practice, or even in people's living rooms today. They do, just as they exist in the holy books of many religions. (Though as scholars like Stanko Andric have noted, these shouldn't be understood as God or a saint throwing a fit, being unjust, or being cruel - these punitive miracles and intercessions have a larger role within the whole dynamic or system, are part of God's will which is not always discernible to us in its entirety from our limited perspectives, serve a legitimate role in a community, and also serve as lessons to the faithful. See for instance Andric's The Miracles of St. John Capistan, in which he notes, while discussing ultiones, that sometimes saints know that you are about to screw up, might try to warn you even, but you may be punished or mess things up *not due to the saint's failure but due to your -- the sinner's -- actions or lack thereof. As I note in my earlier blog post that I linked to above, intercession of saints does not technically, traditionally involve any saint granting your wish or prayer - it involves the saint interceding with God for you; you thank a saint, technically, not for direct action but for going to bat for you in approaching God on your behalf, since God is the source of all this activity, power, etc.)

And while it is actually not super-common, there are some people who will warn you that St. Expedite (pronounced "espedee" or "expedeet" in the Southeastern US, by the way - think of how a French person would say the word, not an American person), among other saints, has a "call" behind them; that means that if you ask their intercession and mess up, or sometimes if you ask their intercession at all depending on what you're trying to do, they will take somebody with them (meaning somebody around your home or family will die). Again, these are not typical views, but neither are they unique to just one person. I personally do not caution people that if you don't hold up your end of the bargain, you should expect death to strike your family -- the reality of working with saints in folk traditions these days is usually a lot less dramatic than that of late antiquity and the Middle Ages -- but I absolutely do caution folks to learn about what they are doing, to form relationships, and not to treat their doings with saints lightly. If you piss off St. Michael by asking him to smite one of his devotees, and your desire is unjustified according to St. Michael, will he strike you down instead? Probably not. But this is no long-tressed, smiling, harp-playing cherub you're talking about, so don't be a fool. At best he might ignore you. At worst he might teach you a lesson. God, after all, taught Job some very colorful lessons, and he liked Job. St. Expedite was a Roman soldier. St. Michael struck down Satan. St. George and St. Martha took out dragons. So I urge you to think carefully before you ask petty things of saints or angels, or presume that your bull is more important than their chapel, so to speak!

If you don't like what I'm saying here, feel free to not work with saints. And you don't have to be a Christian or Catholic to work with (most) saints, in my experience - but what you had better do if you have any sense is know what you're getting into and doing. You cannot just strip away all the history, traditions, and roles of saints, pick out just the nice parts that you want and that make it "easy," and pretend that things like sin, punitive miracles, obligation, traditional roles and temperaments, etc. do not exist. You cannot treat saints like they aren't part of this economy and aren't part of Christian lore and tradition. Doing that - rejecting the fabric and culture and religion of the very saint or spirit you are trying to work with -- is what will get you a punitive miracle. (That goes for spirits, saints, and deities of any religion; if you strip away the culture and religion from which they came and give them makeovers in your own image, according to your own preferences, or act like you can pick and choose which aspects and components you want to incorporate and ignore the rest  -- well, don't go complaining that so-and-so saint didn't work for you when your buffet-style approach gets you some divine smackdown. That was not on the saint - that was all on you.)